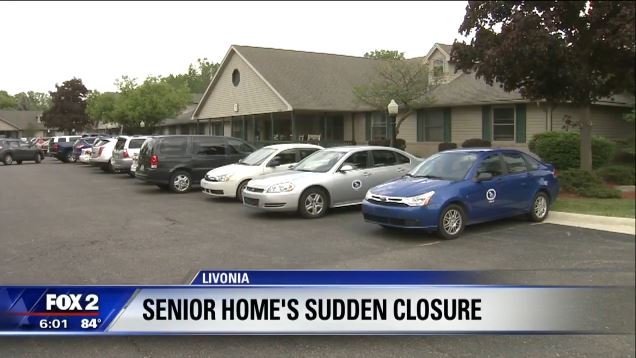 DETROIT — A senior living center specializing in Alzheimer’s disease and other specialty treatment has reportedly lost its license, forcing many senior citizens to relocate with little notice.

Nearly 80 seniors have reportedly been forced to move out the Ashley Court of Livonia after state health officials issued an “emergency suspension” on Wednesday,

The order suspended the center’s license to operate two of its buildings. which specializes in Alzheimer’s disease and specialty care.

“(The Michigan Bureau of Community and Health Systems) also found some quality of care issues,” Michael Loepp, a spokesperson for the LARA, told MLive.com in an email. “But the immediate threat that caused the suspension order was due to the BFS disapproval of the buildings.”

The center, located on 7 Mile, had a licensed capacity of 20, according to LARA.

According to the Detroit Free Press, the order was issued so quickly that Livonia Mayor Dennis Wright said he only found out at 3 p.m. — only three hours before the facility’s suspension kicked in.

The Department of Licensing and Regulatory Affairs had  reportedly been looking into the facility for months.

“This is awful what they’re doing. To give you a notice and tell you they’re going to take it tonight,” Bridgett Schultz told FOX 2 Detroit. “We’ve been married 54 years and I’m devastated. I can’t believe this.”

According to MLive.com, among the list of quality care issues documented by LARA include:

When a resident is injured or dies due to neglect or abuse, the family can file a nursing home lawsuit against the facility. Buckfire & Buckfire, P.C.’s top-rated lawyers sue nursing homes to get settlements and just compensation for the victim and family.

There are many types of nursing home neglect and abuse cases, including: