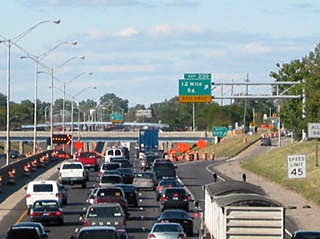 Detroit ranks 24th among the top 25 U.S. cities for time drivers spend in congestion, pairing with Pittsburgh for fewer peak hours spent in traffic, according to a recent traffic study.

Detroit tied with Pittsburgh for 33 peak hours stuck in traffic in 2016, according to research released by Inrix, a transportation analytics firm.

Researchers cite traffic as a sign of a healthy and burgeoning economy, the Inrix report says. Those features also mean greater congestion and associated cost of lost productivity and fuel.

“From the cost of additional fuel and the environmental impact of associated emissions, to the opportunity cost of the time drivers spend stuck in gridlock,” researchers said. “Moreover, the extent to which businesses incur costs of congestion, these are usually passed on to consumers in the form of higher prices for goods and services.”

Detroit tied with Phoenix for the lowest cost of congestion per driver, at $1,062, among the top 25 U.S. city rankings. Both were also among the bottom 25 of the three categories of costs analyzed in the survey: business, commuting and leisure/other.

The study analyzed congestion in 240 cities and large urban areas. It found congestion cost drivers in the United States more than $295 billion in direct and indirect costs in 2016, the study’s authors said. The Inrix Research team is composed of economists, transportation policy specialists and data scientists in Europe and North America. The study covers 1,064 cities in 38 countries.

Drivers in car-crazy Los Angeles spent 104 hours each driving in congestion during peak travel periods last year. That topped second-place Moscow at 91 hours and third-place New York at 89, according to a traffic scorecard compiled by Inrix, a transportation analytics firm.

Being stuck in traffic cost the average U.S. driver $1,400 last year and nearly $300 billion for all drivers nationwide, Inrix said.